On September 20 2011, I decided to go down to Zuccotti Park to see what was happening. I think I had heard from my parent’s  that there was an Occupy group trying to organize there. There wasn’t much happening when I arrived. There was no police presence yet. There was a small group of people holding some sort of meeting in a circle and people were making  weird hand gestures.

The next week I went to Zuccotti Park again. To my surprise there was something magical happening!! The thing was flourishing. There was a sign up table to partake in various working groups. I had no idea what was happening, but the energy there just felt amazing. It felt like change was happening. It felt positive and full of love. Whatever it was, I knew I wanted to be part of it. After looking over the list of working groups, I signed up for the the art/culture and performance groups. I left my email and walked around, taking video footage of what I saw. From that week on I was there every week, watching the Occupy movement flourish and learning the language of politics, something that was more or less foreign to me.

On October 19, 2011, my friend Noah said he was going to initiate a group called Occupy Museums (OM), and that he had a manifesto written. He asked if  I could make some copies of it and take them to Zuccotti and hold a sign up that was to say  Occupy Museums, until he arrived. Noah and some other wonderful occupiers finally arrived and we travelled to MOMA to release Noah’s Manifesto. My role as an initiating member was rather subtle, preferring to serve more as a distraction. I was an active supporter nevertheless.  The experience with OM changed my outlook as an artist and a person forever. In that short window of time, it seemed like we conquered the world;a small group we were. Thinking back to my experience with Occupy Museums. That moment was very scary and made a huge impact on the person I am today. I never doubted the potential OM had or what they would accomplish. Most importantly, I learned about value. Not of the art market, but of being, of collaborating, of trusting and of friendship.

We have also collaborated and overlapped with many other groups such as G.U.L.F, the Novads, Arts and Labor, Occupy the Pipeline, Winter Holiday Camp, and artists such as The Guerrilla Girls, Artur Zmijewski, Pawel Althamer, Maureen Connor, Julia Strauss, and William Powhida. – Noah Fischer

A few actions I took part in….

First Action at The Museum of Modern Art 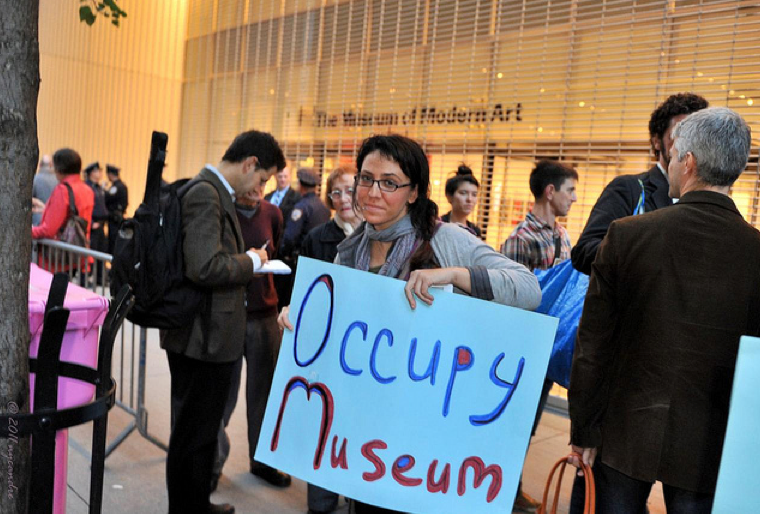 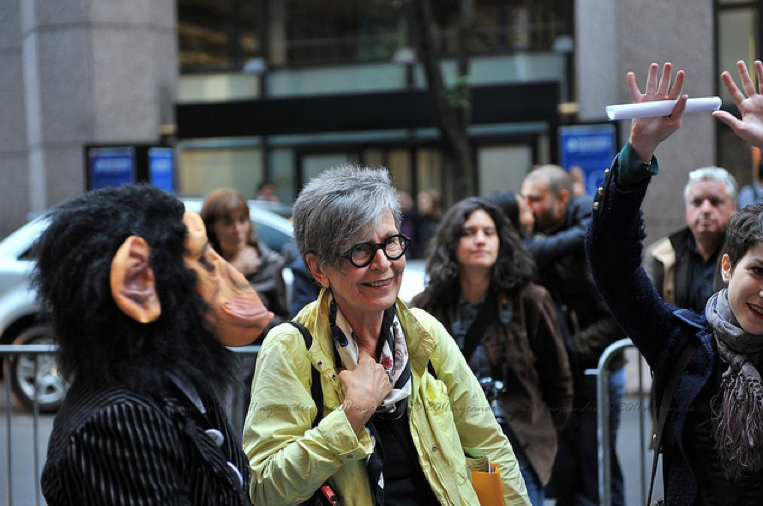 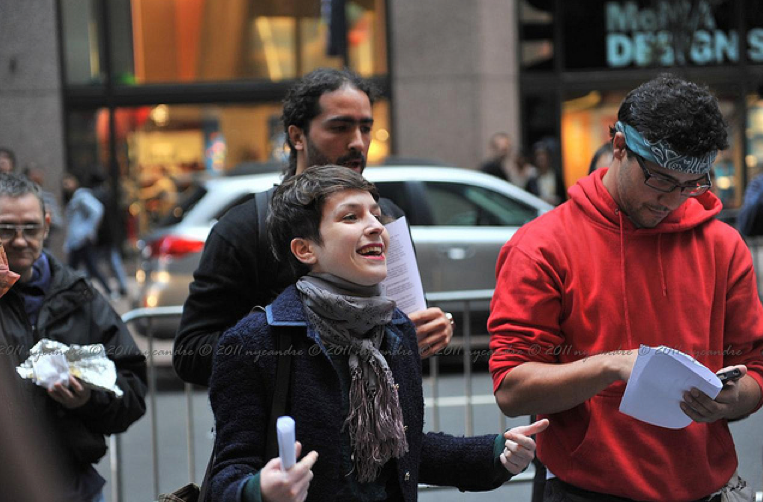 Occupy Museums to protest the anti-democratic policies of Lincoln Center and Bloomberg on the last performance of Satyagraha Thursday December 1, 2011 at 10:30PM.

It is no doubt timely that Philip Glass’ opera ‘Satyagraha’–which depicts Gandhi’s early struggle against colonial oppression in South Africa–should be revived by the Metropolitan Opera in 2011, a year which has seen popular revolutions in North Africa, mass uprisings in Europe, and the emergence of Occupy Wall Street protests in the United States.

Yet we see a glaring contradiction in ‘Satyagraha’ being performed at the Lincoln Center where in recent weeks protestors from Occupy Wall Street have been arrested and forcibly removed for exercising their First Amendment rights to peaceful public assembly .- http://occupymuseums.org/index.php/actions/10-occupy-musium-protests